Home » News & Press » T-Mobile Arena lights up on Vegas Strip thanks to Cox Business, the entity behind the Wi-Fi network at T-Mobile Arena

T-Mobile Arena lights up on Vegas Strip thanks to Cox Business, the entity behind the Wi-Fi network at T-Mobile Arena 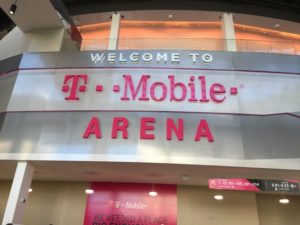 Though we haven’t yet been to a live event at T-Mobile Arena, a summertime visit to the new venue revealed a sparkling 20,000-seat arena with a well-planned Wi-Fi network that seems ready to handle the expected crowds that will soon repeatedly fill the venue.

Thanks to a personal technology tour hosted by Cox Business, the entity behind the Wi-Fi network at T-Mobile Arena, we saw many of the 520-plus Cisco Wi-Fi APs, including many that were housed in custom enclosures that the Cox team designed specifically for T-Mobile Arena. Both aesthetics and functionality came into play for the innovative enclosure designs, some of which can be tilted for more exact event-by-event tuning. The arena, a $375 million joint project between AEG and MGM Resorts, opened on April 6, 2016.

Getting ready for the Golden Knights

Editor’s note: This profile is part of our latest STADIUM TECHNOLOGY REPORT, which includes more stadium profiles as well as looks at Wi-Fi at the Mall of America, and analytics software being used by the Cleveland Browns. DOWNLOAD YOUR FREE COPY of the report today!

With two 10-gbps pipes providing backhaul, the arena’s network should be able to easily handle the traffic generated by its upcoming list of events, which will be heavy on concerts until the NHL expansion franchise (recently announced as the Vegas Golden Knights) arrives. There is also a cellular DAS inside the venue, built with equipment from JMA Wireless. 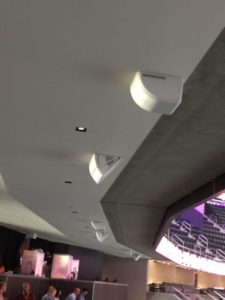 Construction details that we saw that you may not have heard about include the fact that a large percentage of the bowl seats are on moveable tracks, allowing for maximum flexibility in configuration. To compensate for the lack of fixed infrastructure the Cox team used the hanging scoreboard as a prime placement area for Wi-Fi APs, helping solve the traditional bottom-of-the-bowl coverage issues.

Another place where T-Mobile Arena has turned stadium design on its head is with its two “sky lounges” and another exclusive-seating club area at the very top of the building, changing the old “nosebleed seats” section into ultra-lounge type areas that should prove popular for both sporting and entertainment events. The sky lounges in particular are striking, twin triangular decks that jut out over the lower-bowl seats.

From a technology perspective there is also a section of premium seats with tabletop-mounted small TV screens, as well as extra wireless coverage for the press box section. MSR is looking forward to attending a live event at T-Mobile Arena soon, to fully test the impressive looking network installed there. Enjoy the following photo essay: Credit all photos, Paul Kapustka, MSR. 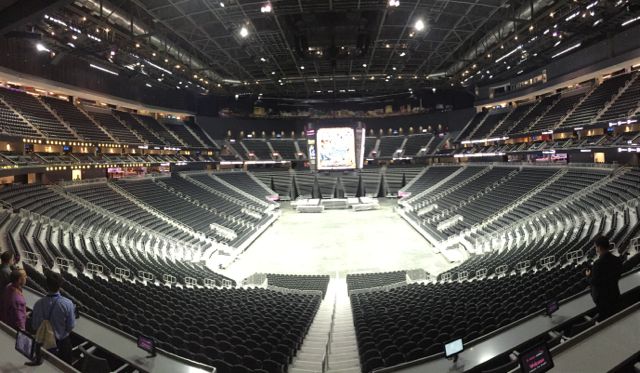 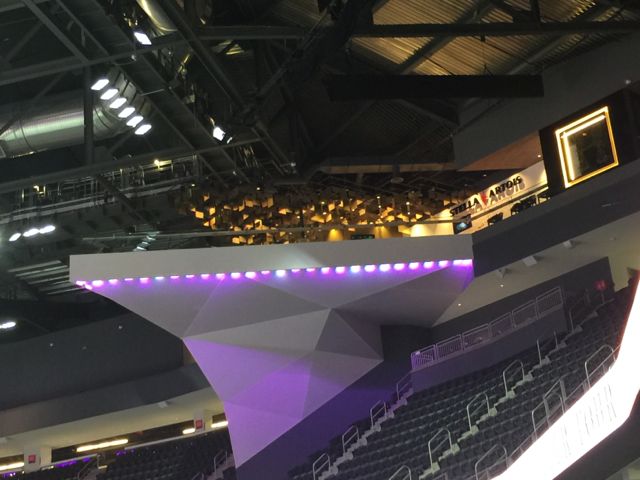 One of the distinctive “sky lounges” that juts out over the lower seats.

Close-up of an AP enclosure with the “skyline” art in the background. 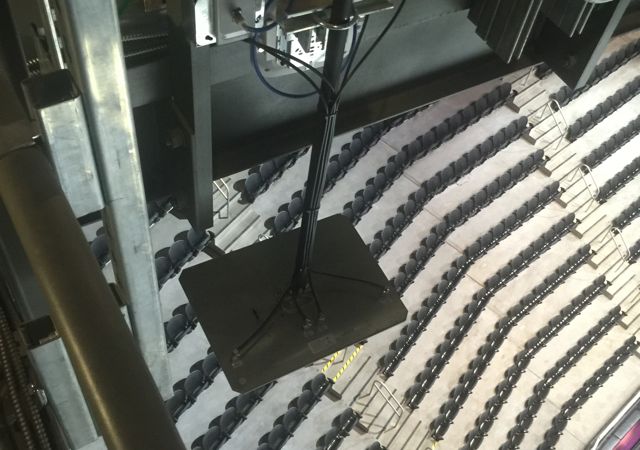 A Wi-Fi antenna points down from the rafters. 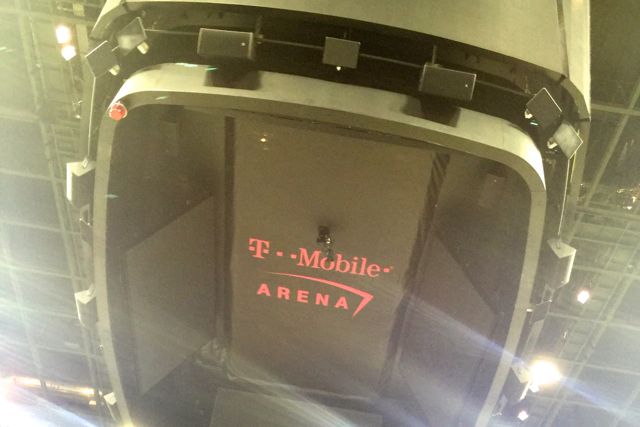 Wi-Fi APs (and speakers) visible on the bottom of the main center scoreboard. 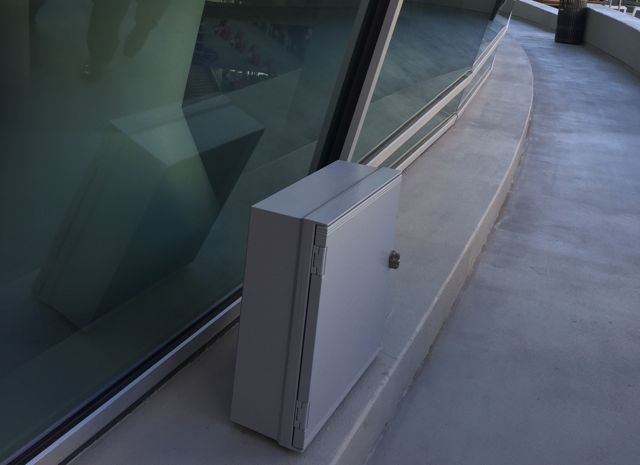 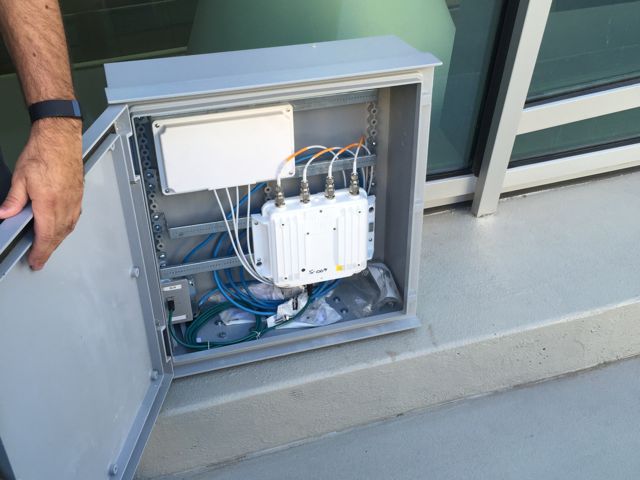 Inside that same AP enclosure. 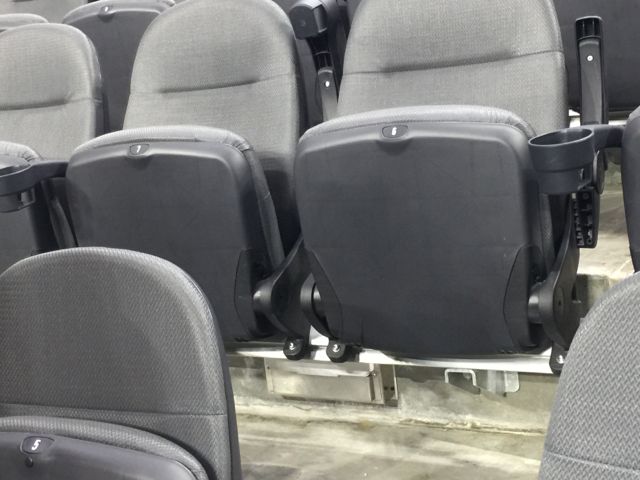 One of the under-seat AP enclosures. 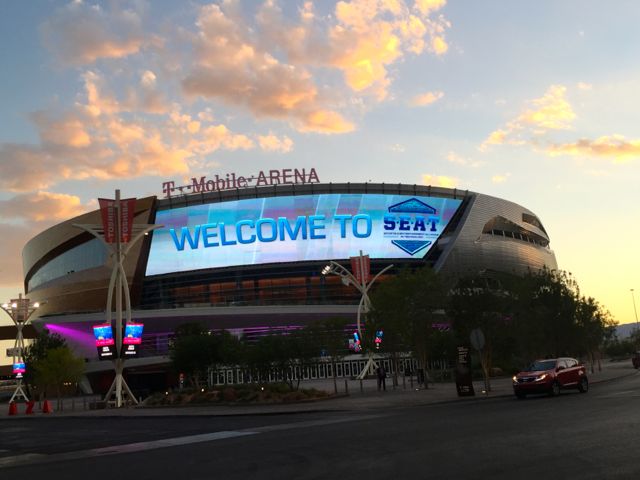